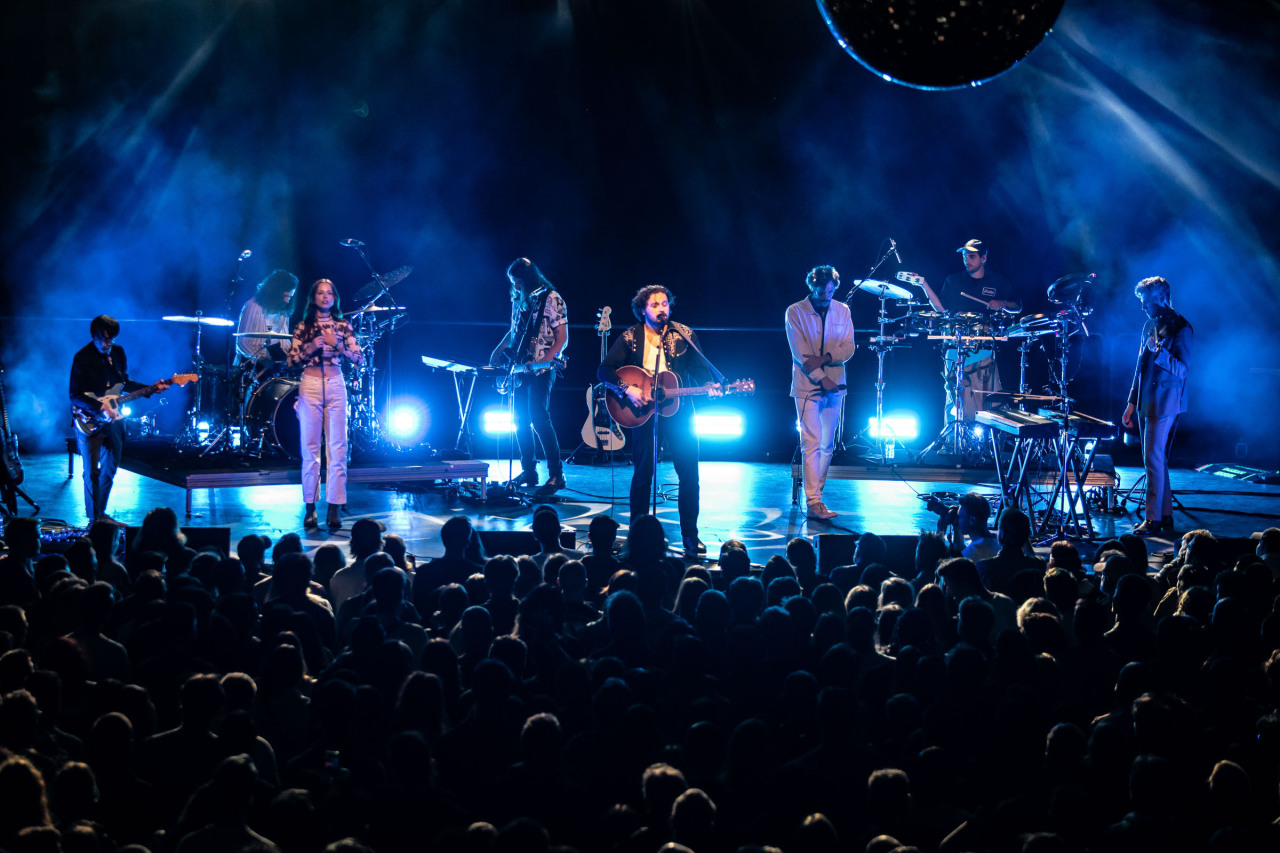 Gang of Youths just can’t help but sound epic: Big statements, grandiose arrangements, swelling emotions and a relentlessly charismatic leader in singer David Le’aupepe, who gives good frontman. Like U2 or Arcade Fire, to whom Gang of Youths are sometimes compared, the Australian quintet’s brand of epic-ness is the kind that doesn’t assault you or turn you nihilist, but instead brings you along with an arm around you and then an agreeable fist pump—come charge up the hill with us, they seem to be saying, because the struggle is worth it. That epic-ness has made them a stadium act in their native country, and even in the smaller confines of Brooklyn Steel last night, they presented as a triumphantly stadium-ready band. It’s not only that they’re earnest—they make you earnest in your belief and acceptance of their earnestness. (Not a bad look in these cynical times, no?)

Gang of Youths’ ambitious 2022 album, Angels in Realtime, is the focus of their current tour, and on Tuesday, accounted for two-thirds of the 90-minute show’s offerings. It’s a heavy record, bursting at the seams with lyrics and sonics and throttling rhythms. You can feel the density even in the quieter tunes, and the anthemic rockers feel ready-made for swells as high as castle walls. But this isn’t featherweight pop or false positivity—there’s a lot of hard-bitten drama and personal tragedy behind that epic-ness. And it isn’t all so serious as that might sound. As self-deprecating, scabrously funny frontmen go, Le’aupepe can cut it up with the best of them, although he’s always on your side. He had the crowd chant-singing back to him from opener “The Angel of 8th Ave.” and many times after, making frequent callouts to his surroundings and Gang of Youths building its New York City audience on frequent returns, such that it felt like a hometown show. Whether leaning into sawtooth punk, big, ballsy rock or woozy electro-pop, he had room for all of us as friends, including early opener Casual Male’s Tim Lappin and Lappin’s guest, Emily, who joined at one point to sing and harmonize—and we were compelled to participate.

Of course, the strength of the show is much more than Le’aupepe. His coconspirators, several of whom play multiple instruments, had everything at full tilt, from the stabbing, boom-chick rhythms of “The Heart Is a Muscle” to the ethereal, synth-and-violin drenched “Tend the Garden.” Reliable Gang of Youths staples like “Let Me Down Easy” and “Magnolia” had the expected big moments—and not before Le’aupepe and band insisted on two false starts for “Let Me Down Easy” to remind the audience that it was a song about “dancing, drinking and being good to one another.” “Goal of the Century,” part of the encore, found Le’aupepe modulating his voice over the word truth like a rallying cry.

For all the cathartic, fast-moving tunes, the showpiece of the set, much like the album, was actually “Brother,” one of Gang of Youths’ quieter songs. At the center of the show, Le’aupepe took solo to a keyboard to share the very personal story of learning secrets about his late father after he was gone. In a few minutes, it had regretfulness, wistfulness, defiance, acceptance, healing—a lot of emotional bases covered and, not raw, but the essential tenderness coming through without being baked in treacly sentiment. Le'aupepe reminded us before and after that it was OK to talk, sing, deliver, whatever the “real shit,” and then, as ever, let his band’s songs explain what he meant. —Chad Berndtson | @CBerndtson