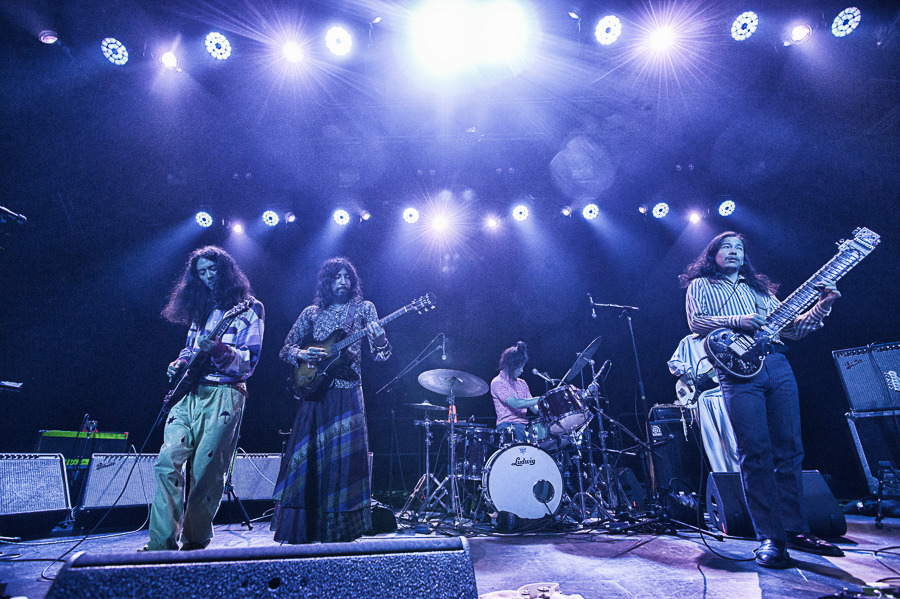 Kikagaku Moyo Remain in Control as They Prepare to Say Goodbye

Among the many amazing things about psychedelic rockers Kikagaku Moyo is how effortlessly their music seems to sneak up on you. A song begins as a gentle, chamber-folkie stirring or a featherweight lilt or a barely there rhythm, and then somewhere in the midst of hypnotic vocals, tastefully injected guitar or sitar, and a pensive mood, comes a whoosh of sound or a shredfest or a pulsating jam segment that could veer noise-rock or shoegaze or surf without much coaxing — or just as comfortably chill itself out into a dream-pop haze. Throughout, the music can feel jittery, fleet or exclamatory, but it’s not anxious. Kikagaku Moyo’s tempered, detached cool stays constant throughout. These guys are in complete control of their sonics and textures.

Alas, very soon we’ll be talking about them in the past tense: These two shows at Brooklyn Steel (they play again tonight) are positioned as their final shows in North America before grand finale concerts in their native Japan later this fall. If this “indefinite hiatus” is the end of Kikagaku Moyo, they’re going out on an unquestionable high — with a dash of bittersweetness, seeing as in so many ways, it feels like they were just getting started. Ten years and an odyssey of increasingly accomplished records and buzzed-about live shows is a good, long run — and tantalizingly short.

Wednesday’s show had some of everything, from low-key, frayed-edge folk tunes and protracted, mostly instrumental jammers (“Melted Crystal”) to slinky, vibe-able grooves (“Green Sugar,” “Monaka”), fluorescent funk (“Dancing Blue”) and noise-loving take-offs (their well-developed, road-honed cover of Ananda Shankar’s “Streets of Calcutta” — an early set highlight). They move as malleable unit. Drummer Go Kurosawa and bassist Kotsu Guy are the pocket, and guitarists Daoud Popal and Tomo Katsurada, and sitar and keyboard ace Ryu Kurosawa — the band’s not-secret weapon — cut it up atop that foundation with space-filling sorcery and what feels, at times, like a symphony of screaming strings. Ryu Kurosawa’s sitar, man — it reaches out like an electrified tentacle and grabs hold, a twangy-sounding current that travels through jams, often before handing off to the coarser sounds of a soloing guitar, providing rich contrast in the sonics without stepping out of them.

The band played close to two hours and it went by like no time at all, even with the full panorama of pillowy-mellow-psyche to planet-gutting-space-rock noise on display. Its final third favored long, knotted excursions on tunes like “Majupose” — a mind-bender in ⅞ time — “Tree Smoke” and “Orange Peel.” They left us with “Nazo Nazo,” a woozy crawl that recalmed the room without quieting its surging energy. In other words, another fine balance. —Chad Berndtson | @Cberndtson