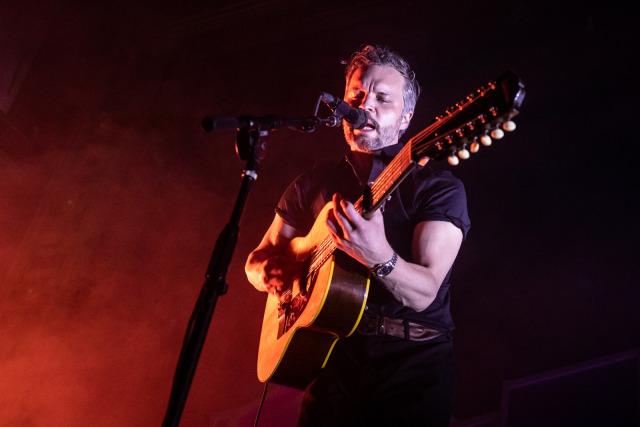 Kristian Matsson, better known as the Tallest Man on Earth, loves to tour and when the pandemic hit, he aptly pivoted to sweet, intimate online shows. He marked the 10-year anniversary of The Wild Hunt with a virtual live performance—for this writer one of the best (and few) concerts I could stomach on a screen because there’s nothing like live music in person. As with his performances in the flesh, the (actually) diminutive singer bolsters a BIG personality and that’s not lost on-screen. He had been putting out short videos for The Light in Demos prior to the pandemic, and his affable on-screen personality lent well through Covid as he broadcasted from his native Sweden and from upstate New York in the Finger Lakes. Matsson was reeling to get back on the road last summer but hit a roadblock to get into the States in the fall. He finally made it Stateside earlier this year and graced the Webster Hall stage on Friday night for the second of two sold-out shows.

Encapsulating the joy of reconnection, the singer-songwriter literally leapt onto the stage to Håkan Hellström’s “För sent för Edelweiss.” He would strum old favorites and tease glimmers of new material for the rabid fans lapping every note from his hands. The Swede opened with a new song, “The Foothills,” followed by the fan favorite “The Gardener.” Matsson professed his love for New York City and expressed how much he missed everyone, “weirdos just like him.” Head bobs commenced as “Wind and Walls” offered charging guitar strums, while the crowd came to a hush for “Rivers.” The evening was this ebb and flow between boisterous declarations and pensive reflection. Opener Alexandra Sauser-Monnig of Daughter of Swords was coaxed to the stage shoeless for an intimate and playful cover of the Velvet Underground’s “I Found a Reason.”

New York City has greatly inspired Mattson, as he recounted living in Carroll Gardens, Brooklyn and people watching from his window, which inspired “The Running Styles of New York,” from his latest release, I Love You. It’s a Fever Dream., out in 2019. After oldies-but-goodies “1904” and “Love Is All” won over the room, the Tallest Man on Earth debuted a new song without a name. The banjo came out for “Somewhere in the Mountains, Somewhere in New York” and the first sung “New York” was followed by rollicking cheers. Although the set ended with “The Dreamer,” the singer returned for a two-song encore of “The Wild Hunt” and “Like the Wheel” at the piano. —Sharlene Chiu | @Shar0ck